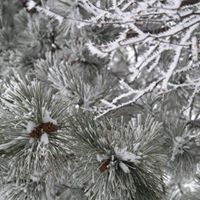 Embarrass is known for its frigid temperatures and claims the rights to the moniker as "the cold spot" in the state.  It is not unusual to see temperatures around -30°F to -45°F many mornings before the sun comes up during the winter months.  The unofficial low temperature set on February 2, 1996, was  -64°F.  More recently, Embarrass reached as low as -54°F on January 7, 2005 and -42°F on January 24, 2013.  Although it may be hard to believe that this can be "normal", it is. It is, also, normal to get killing frosts during the summer months. Consequently, Embarrass residents find it challenging to grow vegetables or beautiful flowers. Theories have been postulated explaining the extreme temperatures.


These theories include Embarrass' location, landforms, and geology. Embarrass is located in the Embarrass River Valley. The Vermilion Range borders the northern end, and the Laurentian Divide borders the southern end and moraines are found at right angles to this valley. Gravity and these natural barriers causes the cold air to sink. The type of soil may additionally influence the temperatures. Embarrass is frequently colder than anywhere else in the state.


Embarrass residents know that the cold weather is coming and prepare for it. When time is spent outdoors, common sense generally prevails.  The winters seem long and rugged. The harshness is offset by the breath-taking beauty of the bright white snow glistening on the landscape. Thoughts of  spring and summer gives hope of warmer temperatures and help residents to endure the winter months.